Scotland covers the northern third part of the United Kingdom. The English border is located to its south. The Atlantic Ocean found on its north and west coasts. To the east, the North Sea, to the south-west the Irish Sea. Scotland boasts wonderful scenery, fantastic places of geographical and historic importance and of course plenty of shopping, restaurants and bars.

Edinburgh has a well deserved reputation as one of the most fascinating and beautiful cities anywhere in the world. It is a very cosmopolitan city, vibrant and varied. One can find Michelin restaurants, lively nightlife and a vivid contemporary arts scene, something is happening every month. Edinburgh Castle sits monumentally above the city offering the visitor excellent views from Scott’s Tower.

Aberdeen has something for everyone, from Aberdeen maritime museum with its striking glass-fronted complex to The Tolbooth which is a 17th century former jail which is now a museum of prison life. If you are travelling with younger children then why not take them to the Satroshere Science Centre which features exhibits mainly aimed at younger children.

If you want to hire a vehicle for your trip then try click and drive car hire located at Aberdeen airport who have a wide range of car for rent.

Glasgow has become a very cultural location. It is quite dominated by arts, theater, music and design. It has been proclaimed as European City of Culture, City of Architecture and Design, and Unesco City of Music. It boasts futuristic architecture of museums and performance venues, one of the most eclectic architectural cities in Europe. Glasgow’s original Gaelic name, Glaschu, actually means ‘Green Place’ and it does have some of the greatest public parks and woodland in Europe. Glasgow offers something for everyone.

There are 15 inhabited islands which make up the Outer Hebrides and boast some of the best stretches of sand in Europe. One of the largest and most spectacular beaches on Harris is Luskentyre, miles of lush white sand and blue-green water, attractive to surfers due to the big Atlantic swells. Wonderful scenery on the Island of Taransay, with cycling and hillwalking nearby. For great sea views take a trip to Traigh Lingeigh or Traigh Hornais.

The Inner Hebrides consists of a chain of 79 islands, of which only 35 are inhabited. For peace, tranquility and quiet reflection is the Abbey in Iona where you will find the sacred remains of Norwegian, Irish and Scottish Kings. Amongst the most rugged and wildest place in Britain is Jura. Living alongside its only road are 20 residents. Be sure to catch a glimpse of the wild stag, golden eagles and otters along the shore. If you fancy a traditional Scottish tipple take a visit to Islay and one of its several distilleries. The largest of the Inner Hebrides is the Isle of Skye. It is home to some of Scotland’s most iconic landscapes and majestic geological features, take sturdy footwear and plenty of time to visit the Old Man of Storr, the Quiraing and the Cuillin. 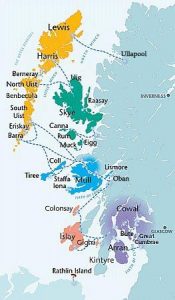 In the heart of the Scottish Highlands you will find the Cairngorms National Park, the UKs largest. It hosts everything from family attractions, distilleries, castles and boundless outdoor activities, something for everyone to take part in. There’s walking, cycling, watching wildlife,(spot a red squirrel), snow sports and water sports.

In the North West Highlands, part of the Grampian Mountain range looms Ben Nevis. Whether you are an avid walker or just out to view the landscapes Ben Nevis is a definite must to visit. The second largest settlement in the Highlands it is also within easy reach of Glencoe, stooped in a history of clan warfare, an exhilarating place to visit. Why not jump aboard the Jacobite Steam train from Fort William to Mallaig. The crossing of the Glenfinnan Viaduct, featured in the Harry Potter films, is one of the world’s most picturesque train routes.

Just off the west coast, south of the Hebrides, in the Firth of Clyde is the Isle of Aaron. Around the shoreline are several idyllic villages. The ferry terminal is located in Brodick, with plenty of hotels and shops. Some of its main beaches are to be found at Whiting Bay, Kildonan and Sannox. The island has a multitude of coastal pathways, forests, small lochs and of course hills and mountains.

Scotland has an awful lot on offer for all the family and some very beautiful and unique scenery.